Has Advertising in Sports Gone Too Far? 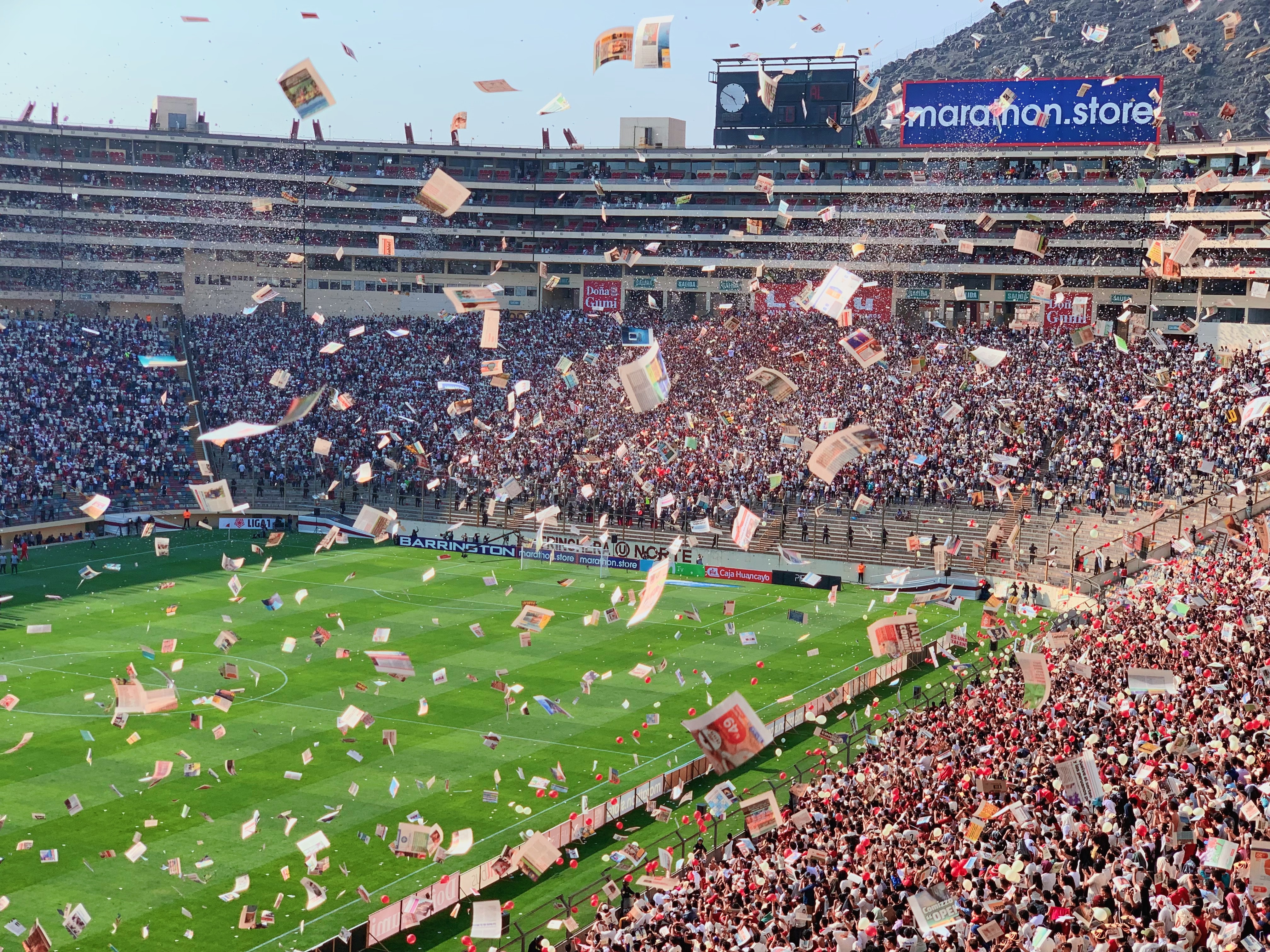 There are many benefits that advertising and sponsorships have for the world of sport, but there are also difficulties and challenges that they may bring.

However, one thing that most sports fans do think of is whether advertising in sports has gone too far. Many believe that over-commercialisation of their favourite sport ruins the game and takes the chance away from players to shine and showcase their talents. Excessive sponsorship deals are at the forefront of many club owners' minds, with some fans believing that their much-loved game is becoming monopolised. But has it gone too far? First, we must consider the benefits of advertising in sports.

Advertising in Sports: The Benefits

One chief goal that all brands have is to be seen as trustworthy and one that consumers want to interact with. Through advertising in sports, brands can achieve precisely that. If people associate a brand with their favourite sports teams or players, they’ll be encouraged to purchase from them.

Certain well-known brands have also been coupled with some big sporting stars; Cristiano Ronaldo is the face of Nike, Lionel Messi the face of Adidas and Roger Federer the face of Rolex and Lindt. Brands will be seen as more trustworthy if they’re associated with the biggest sports stars, especially those who have millions of fans. The Messi vs Ronaldo debate is a long-fought one that has split the football world, with a lot of their fans choosing to purchase solely from either Adidas or Nike due to the fierce rivalry.

Again, brands desire to be known by everyone, so brand awareness is a primary target of businesses. Through advertising in sports, brands can thrust themselves or their products into the eyes of the viewer.

Football teams within the English League have countless stadium and kit sponsors, and so do the players. No matter which division you look at, sponsorship is rife and accessible for all. The teams in the lower divisions would garner less brand awareness for their sponsors than teams in the higher divisions. Still, it’s an excellent opportunity for lesser-known teams to gain more funding and for the sponsors to receive local brand awareness.

The Potential for Real-time Marketing

If brands are able to capitalise on real-time marketing, they can severely differentiate themselves from the rest of the competition. Introducing a human element to a brand can drive customer loyalty and improve the overall customer experience.

During the 2014 World Cup, Luis Suarez infamously bit fellow player Giorgio Chiellini; this wasn’t the first time in his career that he’d decided to take a bite out of an opponent, though. Snickers sought to take advantage of the incident and release a hilarious ad titled: “More satisfying than Italian.”

A year earlier, the biggest game of the American Football season was ground to a halt thanks to a power surge in the hosting stadium. American cookie favourite Oreo pounced and later that night tweeted the following, captioning the post with: “You can still dunk in the dark.”

Has It Gone Too Far?

American Football has become synonymous with advertising. The time that the ball is actually “live” during an average NFL game is 11 minutes; when the whole game roughly lasts for 3 hours, one must wonder what most of that extra time is being spent on. The answer is simple: adverts.

During an average NFL game, between 15-25 commercials are displayed between each quarter, totalling over 100 per game. The ads vary in length, with some short-form commercials taking up most of the showtime. In 2016, the number of 30-second ads in the average NFL game continued to rise, averaging about 70 per game.

Consequently, the cost per advertisement during the Super Bowl has drastically increased in the space of 10 years. In 2022, the average advertisement cost for a 30-second ad was $6.5 million, compared to $2.2 million in 2002.

Fans in the stadiums don’t see any TV commercials that at-home viewers do. Still, the stadium is full of LED billboards and other forms of advertising displays from the various sponsors, lending a hand to the amount of ad exposure stadium-goers experience. Additionally, for non-NFL fans, the Super Bowl has become a chance to watch the trailers for the upcoming year’s most anticipated films. Many people altogether skip the actual game to keep up-to-date with the latest film news.

UK Football took another big step in the journey to full commercialisation in 2017 when sleeve sponsors were announced. Clubs were able to secure deals with additional brands to add them to the left-side sleeve of their kits. Many see this as over-commercialisation; however, the introduction has been positive in some aspects.

The good news for clubs is that it brings in more revenue; many teams are then able to allocate additional budgets to different sectors within the club’s structure. Manchester City, for example, announced their deal with Nexen Tire in 2015 and made history in 2017 when they became the first Premier League team to introduce a sleeve sponsor. The deal with Nexen Tire has been extended throughout the whole club, with the womens, esports and youth teams all donning the Nexen logo on their sleeves. It has been beneficial for the club and the wider Manchester community, as the partnership has had an impact on supporting grassroots football and the lives of young people in the area.

The UK Government is also set to become involved and try and take advertising in football in a more positive direction. Gambling adverts in sports have been an issue for many years, with a large number of football teams including betting brands on their kits. In fact, in the 2021/22 premier league season, betting sponsorships were the most displayed industry, with nine clubs deciding to use various gambling brands.

These nine clubs, and many others from the lower divisions, will be forced to replace the sponsors on the front of their shirts thanks to the UK Government’s crackdown on this matter. New measures are being brought to tackle gambling issues that certain individuals struggle with. There are between 250 and 600 suicide-related deaths each year associated with gambling addiction, and roughly 450,000 11-16-year-olds gamble, so the new rules are a much-welcomed change.

Whilst the Winter Olympics are currently ongoing, it’s important to mention a crucial rule that prevents many sponsorships and adverts from taking place. Thanks to Rule 40, getting your brand’s message across during the Olympics is not so simple.

Coca-Cola has been a chief sponsor of the legendary games since 1928, and the freedom they possess when it comes to advertising is a lot less restrictive than other brands' experience. Athletes cannot talk about branded products, personal sponsors, or organisations they support.

US Snowboarder, Julia Marino, has recently had to pull out of the current Winter Olympics; it was not due to an injury or any other unfortunate circumstance, but thanks to her recent partnership with Prada. The strict rules surrounding advertising, coupled with Prada not being an official International Olympic Committee (IOC) partner, meant that Marino had to either alter her board or face withdrawal from the games. She decided on the latter as the alteration on her board would “defeat the purpose” of the slipstream design.

This isn’t the first time that Rule 40 has caused implications for athletes. In 2019, Team GB sought to take legal action against the restrictive nature of the Rule. Rob Koehler, the Global Athlete Director-General, supported Team GB’s decision, stating that “Rule 40 is an analogue rule in a digital age … it’s time the rule is abolished; it’s time to drag the Olympic movement into the 21st century”. Since this occasion, the rules have been slightly relaxed for particular teams, with Germany and Great Britain being allowed more freedom when it comes to sponsorship deals.