DWP Digital’s Hack2Work: Using tech to help people get back into work 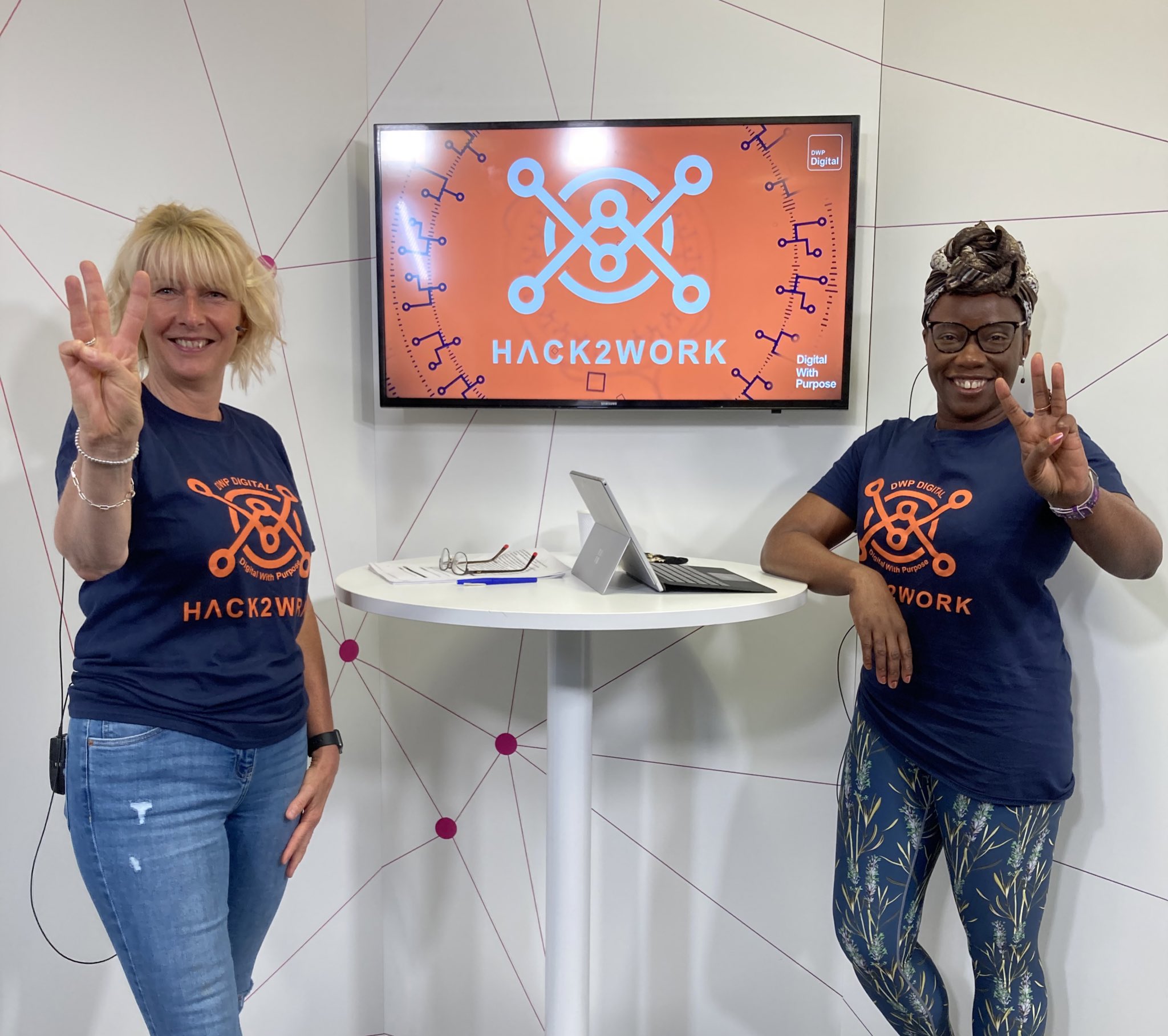 DWP Digital delivered its first virtual hackathon earlier this month. Hack2Work brought together more than 150 people from a wide range of backgrounds to develop digital solutions focused on helping people back into employment following the pandemic.

The hackathon was a competitive event, where multidisciplinary teams tackled real-world problems, developing ideas and bringing them to life by creating prototypes.

The issues were brought to life for participants in a number of ways. Ahead of the hackathon, DWP colleagues worked with a previous jobseeker, who set up his own business in film production after the pandemic left him without secure work in the TV industry. The result was this video about Shay, a young person who was given a job placement through DWP’s Kickstart scheme. The video provided hackers with insights into the problems jobseekers are facing post-pandemic. Kickstart is aimed 16-24 year olds at risk of long term unemployment. It provides funding to employers to support the creation of new jobs.

‘Lightning talks’ from DWP colleagues set the policy and operational context covering a range of topics from jobcentre work coach challenges to DWP Digitals Innovation Lab’s objectives. A number of external speakers were also invited to present, including the employer TalkTalk, who covered the relationship between employers and the jobcentre and the National Careers Service who explained how they partner with DWP.

Once the scene was set, hackers were invited to pitch their ideas around the problem statement and what they’d learned from the presentations. As a result, 11 teams were formed based on the pitch ideas. The teams comprised of DWP colleagues and digital specialists from across the tech sector including: GDS, NHS, CreatorSphere, Solidatus and sponsors MongoDB, ScottLogic, Opencast, Kong, Red Hat and IBM. Hack2Work also had external participants including global attendees with one hacker saying: “I joined from the US. I enjoyed the event very much, waking up at 2:45am here was worth EVERY second.”

Securing the support and sponsorship of six DWP suppliers, Hack2Work provided an online platform for participants, access to software and engineering sites, technical help as well as entertainment and prizes.

Numerous impressive concepts and prototypes were presented on the final day, including the two winning teams’ ideas: a solution to bring jobseekers’ skills and experience together in real-time and a self-service app to enable jobseekers to match their skills and apply for local jobs in their own time, rather than depending on work coaches.

Karam Agha, a Computer Science student, who was part of one of the winning teams said: “I really enjoyed watching our team's idea go from words to a full design and prototype with mocked functionality in such a short time.”

The idea was ‘RouteToWork’, a tool that ties together functionality from various government services, such as the National Careers Service and data accessed using the Office for National Statistics APIs, to match jobseekers to the opportunities that are relevant and local to them.

Karam added: “I also learned about MongoDB's Atlas and Realm and used Red Hat's OpenShift to deploy and host our application. The site we built follows Government Digital Service design and WCAG2.1 accessibility standards, tested with Axe accessibility tools, to ensure its usability and has a user interface that's familiar to our target demographic.”

‘RouteToWork’ was built using the gov.uk prototyping kit. Nunjucks was used as a template and it was written in JavaScript and HTML, with an Express.js server running the whole thing.

Reflecting on the ideas that were created over the three days, Jacqui Leggetter said: “I was blown away by the quality of the entries. Everyone was working remotely alongside people they’d never met (even virtually) until the first day of the hack, and yet they still came up with incredible ideas and developed them to a really impressive standard. The amount of working code we’ve seen is unprecedented for a hack event. It was difficult to choose a winner but the amount of thought that had gone into both the front and back end made the two joint winning teams stand out.”

CDIO Simon McKinnon said he was "amazed by what had been achieved in such a short time.” He also spoke about how impressed he was that every team had created working code.

DWP Digital is always on the lookout for new talent. To find out more about career opportunities visit DWP Digital Careers site or subscribe to the DWP Digital newsletter keep to update with the latest roles, news and information.